Hector is more swimming than driving through heavy rain direction East, but finally we arrive at Montignac in the early afternoon. The small, attractive town is located in the Vallée Vézère and is the main base for visitors to the famous Grotte de Lascaux.

The last rain shower of today leads us inside the beautiful church at the Place Carnot.

Right beside the church (take the perspective of the photo above, turn left for 15 meters and enjoy) the Salon de Thé “UniVert” offers wonderful tea, perfect coffee and a choice of homemade cakes. With restored forces, we cross the brownish water of the Vézère and follow the signs to the office de tourisme. We buy tickets for one of the English guided tours next day, gather further information about the region and its camp-sites and stroll around some more. 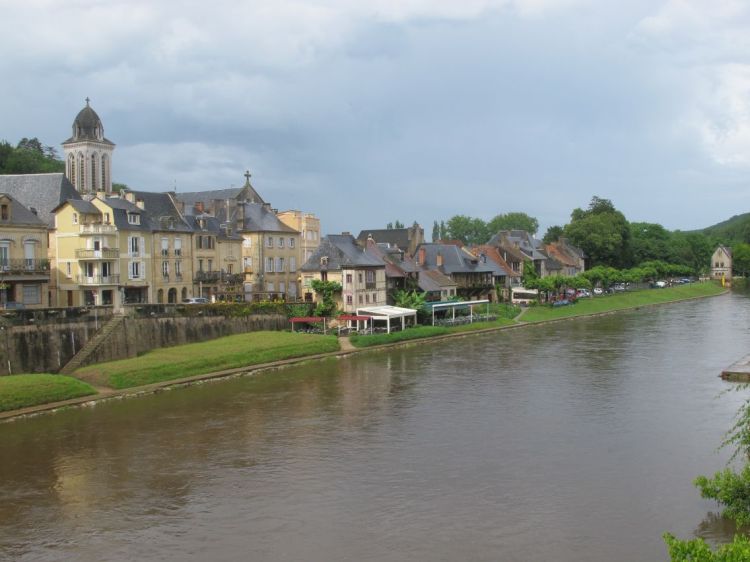 Montignac village itself is not even mentioned in most travel books. Only recently, art exhibitions and little cultural events try to lure tourists for more than just the ticket sale. With the camp-site in walking distance, additional camper van parking and a nice mixture of restaurants, cafés, bars and galleries, the village is inviting enough for a stay and today’s football match “Allez les bleus!” against Albany. 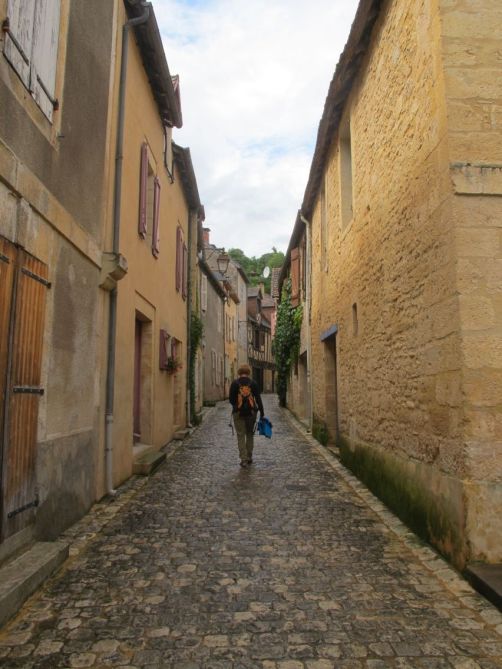 With Linda in the alleys of Montignac

The next morning, we leave Hector at the huge parking beside the construction site of “Lascaux IV” (opening Dec. 2016) and walk up the hilly forest to Lascaux II. When they learned that masses of interested tourists destroy the 19.000 year old paintings just by breathing in and breathing out, scientists and artists worked more than 10 years on the perfect copy of the historical cave.

The facsimile is only 200m away from the original, located in a natural cave somewhere in the forest. Once inside, we lose any feeling of “this is only the copy”, but are stunned by the sensation of fantastic pictures that fill walls and ceilings.

The tour guide presents some background of the paintings, evoking vivid images of the ancient artists. 4.000 years lie between the oldest and the newest painting, some of them layering one above the other on the cave walls, up to a height of 6,5 meters. Before we came here, I had some ideas of the oldest paintings worldwide (wrong), showing every-day-life themes (nope) that had been created by the inhabitants of some stony cave (wrong again: the cave has never been inhabited). In fact, the cave of Lascaux was reserved exclusively for art and ritual gatherings over numberless generations of the Cro-Magnon people.

The paintings show several different, identifiable styles and I am overwhelmed by the evident skills for perspective and expression. Suddenly, I understand Picasso who saw Lascaux and said: “We have learned nothing new.”

Later that day we make a stop at the Château et Jardins de Losse. After the impressive visit of the Grotte de Lascaux, the castle cannot keep up with the prehistoric art, but the tour guide’s constant repetition of “Jean II (deux) de Losse” with the sound of “dö-dö” over and over again comes up with a certain fun factor. 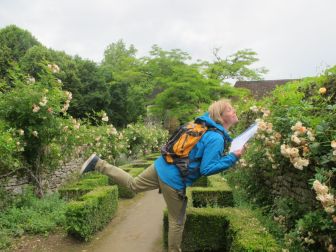 The garden of the castle is nice (but much smaller than expected) and the tour through the building reveals that success, money and taste may fall apart significantly.

During the afternoon, we follow small routes around the D45 to Bergerac. The first thing we see at Camping La Pelouse is the sign “complet” = full. Lucky us, when we ask for a pitch for the night, they still have three to offer and we choose the best site at the shore of the Dordogne.

Just in time for today’s match Germany – Poland, we cross the bridge to the historical centre of Bergerac and look for a nice bar with a TV screen.

The compact vieille ville is a beguiling area to wander through. We pass by medieval houses, protestant churches and two statues of Cyrano de Bergerac, with inviting restaurants on every step we take. Thanks to the helpful advices of some locals on our way, we finally drop into a relaxed bar between the Eglise Notre Dame and the Place de L’Europe. It must have been a strange appearance: 2 girls walking in, talking English and aiming to watch the German Mannschaft in today’s European football comptetition…

Filled with today’s impressions of prehistoric art, medieval buildings, modern football and romantic poets, we follow the lights over the bridge to our luxurious home. For a second, I think of painting bulls and mammoths on Hector’s ceiling, but within the blink of an eye I fall asleep.