There is no bed like Hector’s bed. Even though the ferry cabin is comfortable, I wake up at 5:10 am. The glimpse out of my window tells me to take the camera and run.

With nothing but water around, the sunrise is the most colorful start into the day. The hardest part is to keep the camera still while my body is shaken by strong wind. There is less than a handful of people on the open deck, probably due to the coffee serving starting too little too late. With the stormy wind, the other theory is that some of the early birds have been blown over the rail – you never can tell. When 90 minutes later I stand in line among dozens of impatient travellers, I have to revise the second theory: still masses of people are on board, all waiting for the restaurant doors to open.

Most of the buffet is worth the effort of pushing greedy pensioners and starving kids out of the way. The only mystery is the consistency and the chemical formula of the so-called scrambled eggs, made out of anything else but eggs.

At 9:10 AM the ferry lands in the Kiel harbour and I hurry down to Hector. I jump behind the wheel just in time to leave the sea and get back on solid ground. 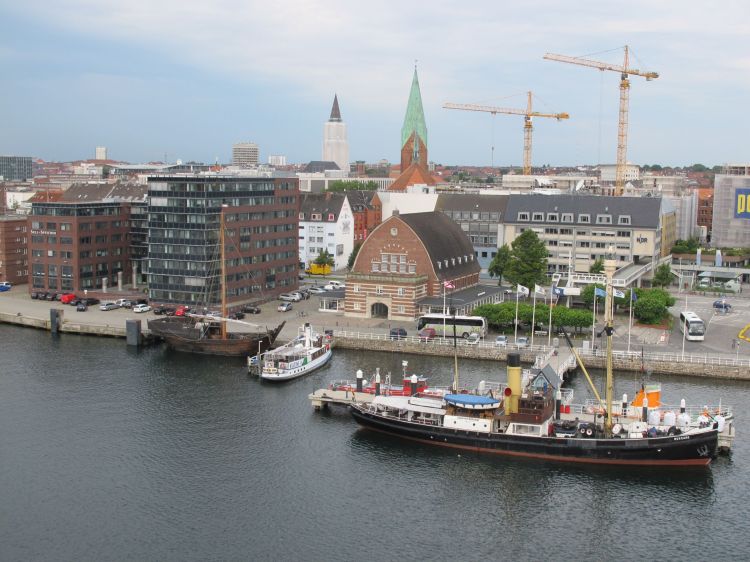 First I go straight to the camper parking in Kiel Wik and Hector settles down on the last available parking slot with view on the canal. Only inches away from the windscreen huge freight ships pass by the Watergate of the Nord-Ostsee-Kanal – and that is not even the biggest highlight of the day. 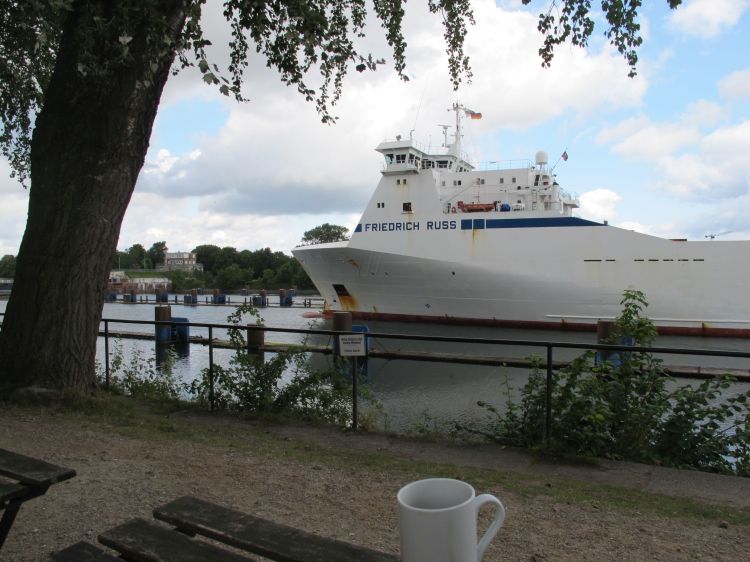 Here begins the canal between Baltic Sea and North Sea

I spend the early afternoon in the city of Kiel with increasing tension. Only hours from now I will meet a lady that will show up in a cute dress and long dark hair, talking about trips across Europe that are twice as cool as mine.

While I sit in the sun, the eyes half in my book and half on the Kieler Förde, a green bicycle comes to a halt in front of me and there she is: legendary Svenja. Seconds later we have a glass of Prosecco in our hands and start with what seems to be an everlasting conversation about life, travelling, motorbikes, camping, food, wine, culture, friends and whatever else makes the world go round.

It feels like only a few minutes have passed when Hector proudly presents his inner and outer qualities and we finally have to part. So much is still there to be discussed and talked through, but we both know that travelling is about moving and so we say farewell. It only is a matter of time until Svenja + Greeny may cross our paths again.